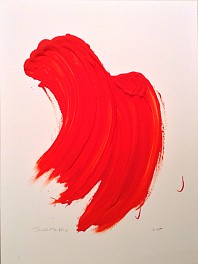 "I enjoy talking about my work. I love to lecture. I’m surprised that I really like the people who collect my work. I figure I just like to make the work and let all that other stuff happen away from me. Everybody that I have met who has collected my work has been fascinating and interesting. I really like them, personally, every one of them.”
-Donald Martiny

A plan to become an artist at a young age, Martiny is making changes to what is classified as a painting. His free form paintings encompass gesture and color, distinctly incorporating Martiny’s positive outlook. His work is balanced by his experience at Doubleday and a traditional art education of copying famous works. Martiny has found a way to expand the interpretation of what society labels a painting through his medium and process. His paintings are combined with names of streets or places that have meaning to him combined with a memory of the gesture and color. An inside look into Martiny, the man behind these expressive paintings, takes your understanding of these paintings to another level.

Donald Martiny was born in Schenectady, NY in 1953 and currently lives and works in Chapel Hill, North Carolina. He studied at the School of the Visual Arts, The Art Students League in New York, New York University and the Pennsylvania Academy of Fine Arts. Museum exhibitions include the FWMoA, Courtauld Institute of Art, Alden B Dow Museum of Art, Falmouth Museum, and the Cameron Art Museum. In 2015 Martiny received a commission from the Durst Organization to create two monumental paintings that are permanently installed in the lobby of One World Trade Center in New York City. In 2015 Martiny received the Sam & Adele Golden Foundation for the Arts Residency Grant and his work has been featured in the Huffington Post, NPR, Philadelphia Inquirer, VOGUE LIVING |  Australia, New American Paintings | South and Woven Tale Press. Martiny’s work is represented by galleries in Europe, the US and Australia and is collected internationally