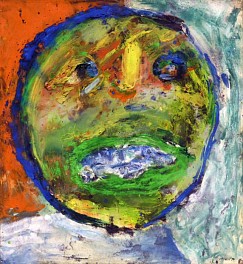 George McNeil (1908-1995) had a career that spanned the entire postwar American art era. McNeil attended Pratt Institute and the Art Students’ League, where he studied with Jan Matulka. From 1932-36, he studied with Hans Hofmann, becoming Hofmann's studio classroom monitor. In 1936 he worked for the Works Progress Administration Federal Art Project and became one of the founding members of the American Abstract Artists group. McNeil was one of the few abstract artists whose work was selected for the New York World's Fair in 1939. During World War II, he served in the US Navy.

In the late 1940s McNeil taught at the University of Wyoming and then taught art and art history at Pratt Institute until 1980, influencing generations of young artists.

A pioneer Abstract Expressionist of the New York School, McNeil had over forty solo exhibitions during his lifetime. Between the ’40s and until the mid ’60s his art was decidedly abstract but it was always joined to metaphor.

From the ’70s onward, McNeil explored ways to expand beyond the cannons of the Abstract Expressionism. In this period his work became more figurative, drawing inspiration from the dynamic life of the city, its dancers, discos and sports. Throughout his career as a painter McNeil commanded a mastery technique, capable of creating paintings of rich texture depth and color. In 1989, McNeil was elected to the American Academy of Arts and Letters.

George McNeil died in January of 1995 in New York.

Commentary:
George McNeil was one of the most important and influential New York School artists and teachers of his generation. There is no period during his six-decade long career in which his work is not highly regarded. McNeil’s work has been prominently and widely exhibited ever since his debut as one of only five non-objective painters in the New York World’s Fair Show of 1939. Today, his work can be found in such important collections as: the Metropolitan Museum of Art, the Museum of Modern Art, the Whitney Museum of American Art, the Brooklyn Museum of Art, the Walker Art Center in Minneapolis, and the Museum of Contemporary Art in Los Angeles, to name a few.

Looking back on his lengthy career, McNeil must be considered one of the preeminent American expressionist painters of the 20th Century. His work evolved successfully from the post cubist abstract expressionism of his Hofmann School days, through the figurative expressionism of his mid-career during the 1960’s and 1970’s, to emerge as full-blown neo-expressionism in the 1980’s and 1990’s. With “avant-gardism” as his watchword McNeil was always at the forefront of the American expressionist movement. His extraordinary body of work pays tribute to his enormous talent and his uncompromising commitment to artistic growth.

In a statement prepared for a solo exhibition of his work at the State University of New York at Binghamton in 1985 McNeil commented, “I have been told that my abstract landscapes and my beat up figures make me a part of the New Expressionist movement. This disconcerts me because I have been an old expressionist for so long that it isn’t funny. I am like Moliere’s Monsieur Jourdain who was surprised to learn he had been speaking prose all his life.”