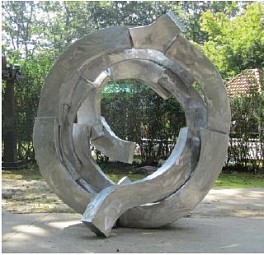 Renowned for his monumental sculpture created primarily for open-air public locales, Hans Van de Bovenkamp has been described as an artist-mystic whose work -- with its signature power, lyricism, and grand proportions -- heightens the viewer's sense of imagination and discovery.

A Dutchman and a youthful immigrant to Ontario, Canada, and then the United States, he was a part of the avant-guard Tenth Street scene in the New York City of the 1960s, an adherent of Abstract Expressionism, and has maintained residences in New York City and Sagaponack in the Hamptons. Mr. Van de Bovenkamp has earned an international reputation in the past 50 years for designing, fabricating, and installing over 100 unique commissioned sculptures and fountains in collaboration with architects, cities, museums, and private individuals. His works can be seen in public, civic, corporate and private collections. Recent solo exhibitions include Grounds for Sculpture, Hamilton, NJ, and the Danubiana Meulensteen Museum, Bratislava, Slovakia.

“I find myself working towards an art which includes a spiritual dimension. I have become increasingly aware of art as a dialogue between matter and spirit. In recent works, I have emphasized myth, symbol and dream to evoke an atmosphere in which the sculpture and its environment speak to the subconscious to make the observer aware of the dreamlike nature of life, of which we all are part.”