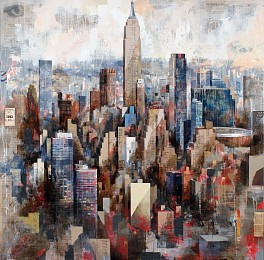 Marti Bofarull was born in 1965 in Molins de Rei, a historic village near Barcelona. The grandson of prestigious artist Carme Sala, Bofarull was exposed to a remarkably academic artist life. From an early age, he studied a rich variety of painting techniques including geometry, perspective, and “Plein air” painting. At age 16, Bofarull was admitted to the prestigious Massana School of Art in Barcelona where he studied painting in addition to photography, serigraphy and printmaking.

After graduating, Bofarull became an art teacher in his workshop in Molins de Rei, where many of his students began to follow his personal style in their artwork. This style is described as a combination of tradition and contemporary modernism, tradition stemming from Bofarulls grandmother Carme Sala and the contemporary influence coming from the Massana School of Art.

Bofarull became famous thanks to his American cities landscape paintings. By giving a personal view of New York, Chicago, and San Francisco, Bofarull found his iconic style in painting. He uses American architecture as a device to create an original distribution of painting space. He combines this with an innovative way to display colors and textures and discretely includes modern mixed media elements as collage into the canvas composition. Bofarull is constantly renovating himself, and because of this he is open to investigation and experimentation with new ways of painting production. By complementing classic compositions with new technique, Bofarull draws the audiences focus to the buildings, the light and the reflections in his work. The American city becomes a canvas or a panel where Bofarull helps us to see a wonderful performance of real life elements organized in a wise use of personal imagination and seduction, transmitting visual pleasure from our own familiar urban landscapes.

“Martí Bofarull’s work fits in with renovation of the urban landscape that has characterized Catalan painting of the last twenty years. Among our artist who have remained loyal to figurative techniques, several have successfully fixed their gaze on the architecture, the streets and the commercial trappings of the modern city…. New York is the culmination of cities of our time and Martí Bofarull has returned to it time and again in recent years. There is a cyclopean and overwhelming New York, and another one made of somber buildings and opaque bridges. There is a New York made cold bluish we can perceive from high in the air, and a gaudy and variegated New York that vibrates around Times Square. Thus the painter meets challenges without end, and the viewer who has followed Marti Bofarull’s work hopes he will keep finding new corners of the city, new angles, new details.”
-Sergio Vila-Sanjuan

ACCOMPLISHMENTS
Teacher, Molins de Rei
Published his works in a variety of books, his most recent dedicated to his Manhattan paintings
Large scale work in the “Burg Dubai”, Dubai, the tallest building in the world