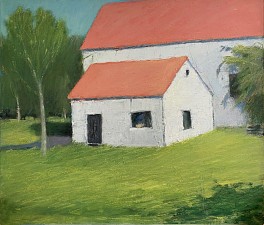 My paintings are intuitive responses to the myriad forces that shape my life—emotions that translate into color, visual memories of forms and color relationships found in the landscape, and personal stories from my past. I have painted consistently since childhood, starting with oils, and am currently painting with acrylics as well, which enables me to create multiple layers rapidly without muddying my palette. The work process is one of constant experiment and change— building layers of color, form and image on the canvas revealing the underlying pentimento. My paintings are not planned, they are discovered, an evolution that is exciting and invigorating.

Of my three current series, Ether is the more interior, emerging directly from what is in my head, while Landscapes arises from direct experience—what I see in nature, captured by my internal camera and explosively transformed. Out of My Mind also focuses on direct experience; however, the experience is of human nature—traumatic and mysterious events, family gatherings and childhood memories. Together, these series forms a body of work that transcends topicality and embraces an ever-expanding category-defying approach to art that reflects my desire to spread beauty and joy through the transformative power of the creative process.