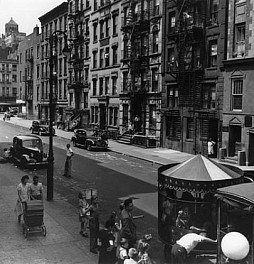 Morris Engel was born in Brooklyn, New York on April 8, 1918. He attended Abraham Lincoln High School and joined the Photo League in 1936 where he met Aaron Siskind, Berenice Abbott and Paul Strand, who invited him to work on his film "Native Land." Engel became a staff photographer on the newspaper "PM" and joined the Navy in 1941. As a member of Combat Photo Unit 8 that landed on Normandy on D-Day, he received a citation from Captain Edward Steichen. After his return to "PM" he worked for many national magazines including "Ladies Home Journal", "McCall's", "Fortune", "Colliers" and others. His initial taste for motion pictures begun with Paul Strand reached a new level when he built a lightweight hand-held 35mm camera with Charles Woodruff. This camera was a major factor in the production of his first film, "Little Fugitive." It served the dual purpose of creating extreme fluidity, and being able to work on a small budget, with a tiny crew. The film, which is about a 7-year-old boy who runs away to Coney Island, has received international acclaim. Francois Truffaut said "Our new wave would never have come into being if it hadn't been for the young American Morris Engel, who showed us the way to independent production with his fine movie "Little Fugitive." It won the Silver Lion at the Venice Film Festival, was nominated for an Academy Award, and was selected by the Library of Congress National Film Registry in 1997. Engel and Orkin married during the making of "Little Fugitive" in 1952, and made a second film together, "Lovers and Lollipops." Engel made "Weddings and Babies" in 1958 that starred Viveca Lindfors, and "I Need a Ride to California" in 1968. He most recently completed two video features, "A Little Bit Pregnant" in 1994, and "Camellia" in 1998. He also does photographic panoramas on the streets of New York City.

AWARDS:
Oct 27, 1945, United States Navy Photographic Institute Citation for Exceptionally Meritorious Photography, Awarded Navy Day
For Outstanding Achievement While Serving As A U.S. Navy Combat Photographer and as a member of combat photo unit number eight. For an exceptionally fine series of still photographs of the invasions in Southern France and on the Normandy Beaches, where his indifference to danger and his keen awareness of what scenes were most vital in the action around him, resulted in a contribution of great value to the visual records of the war. His photograph showing enemy dead on the Normandy beach, taken on D-day and in the face of grave danger, is one of the great pictures of the war and reflects the highest credit upon Engel and the U.S. Navy photographic service. Signed by Edward Steichen, Captain USNR/Director, Navy Photographic Institute
1998, Mayor’s Office of Film, Theatre and Broadcasting, Crystal Apple Award
1998, Lifetime Achievement Award, Photographic Administrators
2002, Pioneer of Independent Cinema Award