Jim Rennert "With These Hands" 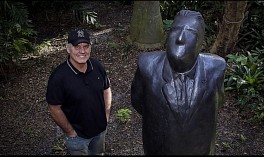 White-collar workers have their say in Jim Rennert’s sculptures

A show of 15 of his large-scale bronze sculptures is at the Ann Norton Sculpture Gardens in West Palm Beach.

Jim Rennert wasn’t a big success as a businessman.

He has been a stockbroker, investment banker, office furniture salesman and the owner of a golf ball company.

“Honestly, I was not ever fulfilled that way, and frankly, I wasn’t that good,” he said. “It was difficult. It wasn’t my bag.”

But his 10 years in the corporate world opened a door to a far more satisfying career.

He’s now a successful sculptor of figures that portray the everyday challenges of white-collar workers.

The artist talked about his work Monday as he was installing “With These Hands: Sculptures by Jim Rennert,” a show of 15 large-scale bronze figures, on the grounds of the Ann Norton Sculpture Gardens in West Palm Beach.

He’s being represented by Ron Cavalier, whose galleries include the Adelson Cavalier Galleries in Palm Beach, since 2005.

His show at the Ann Norton, the first multi-work exhibition of his large-scale sculptures, resulted from the gardens’ partnership with the Palm Beach Modern + Contemporary art fair, under way in downtown West Palm Beach through Sunday.

Cavalier agreed to represent Rennert even though he already had a full roster of sculptors because he’d never before “encountered bronzes depicting ordinary men in suits, elevating the daily trials, struggles and triumphs of business to fine art,” he wrote in an essay about the artist.

“Jim Rennert’s sculptures are a unique portrayal of the human condition and viewing these monumental works among the beauty and tranquility of the gardens allows us to pause and reflect on the state of our lives,” said Cynthia Kanai, the gardens’ CEO.

Rennert, who is 61, recently moved to New York City.

When he walked away from his business career, he was in his 30s. He had a wife and five children, with another on the way, and no formal art training.

What he did have was a can-do attitude.

He taught himself how to sculpt in bronze, and in the early days, cast his own work in the driveway of his garage.

He recalls hauling a 50-pound sculpture uphill from gallery to gallery in Park City, Utah years ago, until he finally found one that would sell it.

Even getting the fork lift he was using to install his sculpture at the Ann Norton stuck in the dirt on Monday didn’t vex him.

A 12-foot version of “Timing,” a figure of a man in a business suit looking at his watch, was lying on its side on the ground awaiting the freeing of the fork lift.

“He’s saying ‘Do I really have to get up?’” Rennert quipped.

More seriously, he said “I think timing is everything. It’s an important piece to do because it relates to so many things in our lives.”

As his work has evolved, his sculptures have become more abstract.

“It used to be when I sculpted in detail, people would wonder ‘Who is that?’” Rennert said. “I didn’t want who it was, it was about what it was. That allows people to interject the work into their own lives.”

During the past year, he’s begun sculpting female as well as male figures.

In Rennert’s art, body language does the talking.

The 12-foot “Think Big” is a figure of a man looking up with his arms at his sides. “He’s trying to gain whatever inspiration he can to think big,” Rennert said.

The figure “Perspective” also is looking up, but it’s in a more relaxed pose with its hands behind its back.

In “WTF,” a male figure stands with its arms outstretched in a gesture of frustration.

“I think this is hilarious, because you think big and try to get perspective and then it’s ‘I don’t know,’” Rennert said.

Roadblocks like that confront everyone, which is why Rennert isn’t likely to run out of ideas any time soon.